Tuleap pull requests (aka PR) are built on top of Git. They provide an easy way to do code review and integration workflow.

There is not a single way to use pullrequests. The way you will use it depends on the size of your team, the knowledge team members have with git and the workflow you are already used to.

In this documentation we will present two possible workflows that will allow to demonstrate all supported features. Keep in mind that you can define your own.

The simple workflow doesn’t require specific setup or to do advanced commands with git. It’s suited for a small team or for git beginners.

We have 2 developers, Alice and Bob. Bob is a contributor who wants to push a new feature into the repository and Alice is the integrator who will review and eventually merge the code produced by Bob.

Bob has a local working copy of libaa and made a new contribution “feature 1”. He thinks the feature is ready to be integrated inside the public repository.

Bob needs to push his development to the Tuleap server and then generate a pull request.p

Once the code is on the server, Bob goes to the Tuleap web interface, in the repository (git service).

From there he can create a pull request by selecting the source and target branches. 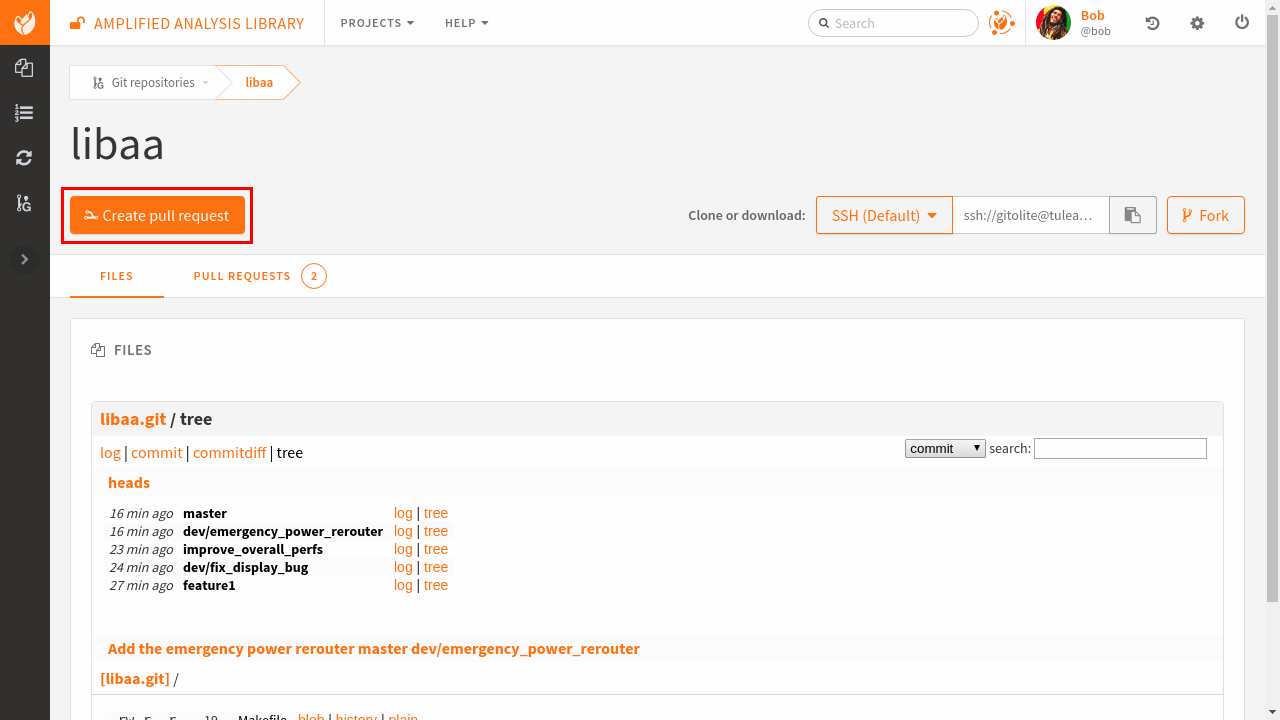 Source branch is where the work was done, target is where it should be integrated.

Bob is redirected on the pull request screen where he can quickly see the major information about his work.

This information can be edited directly from the web browser. 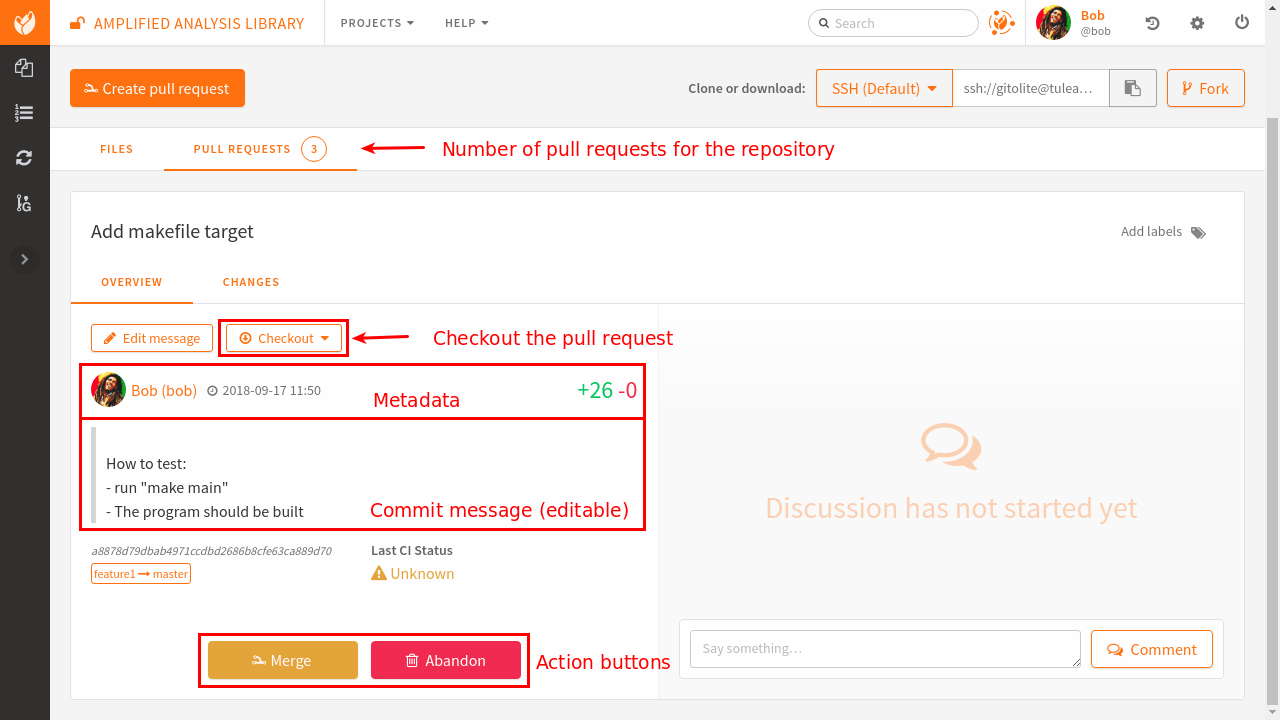 Once Bob has created the pull request, Alice can review it. The majority of the work is available in the “Files” tab. 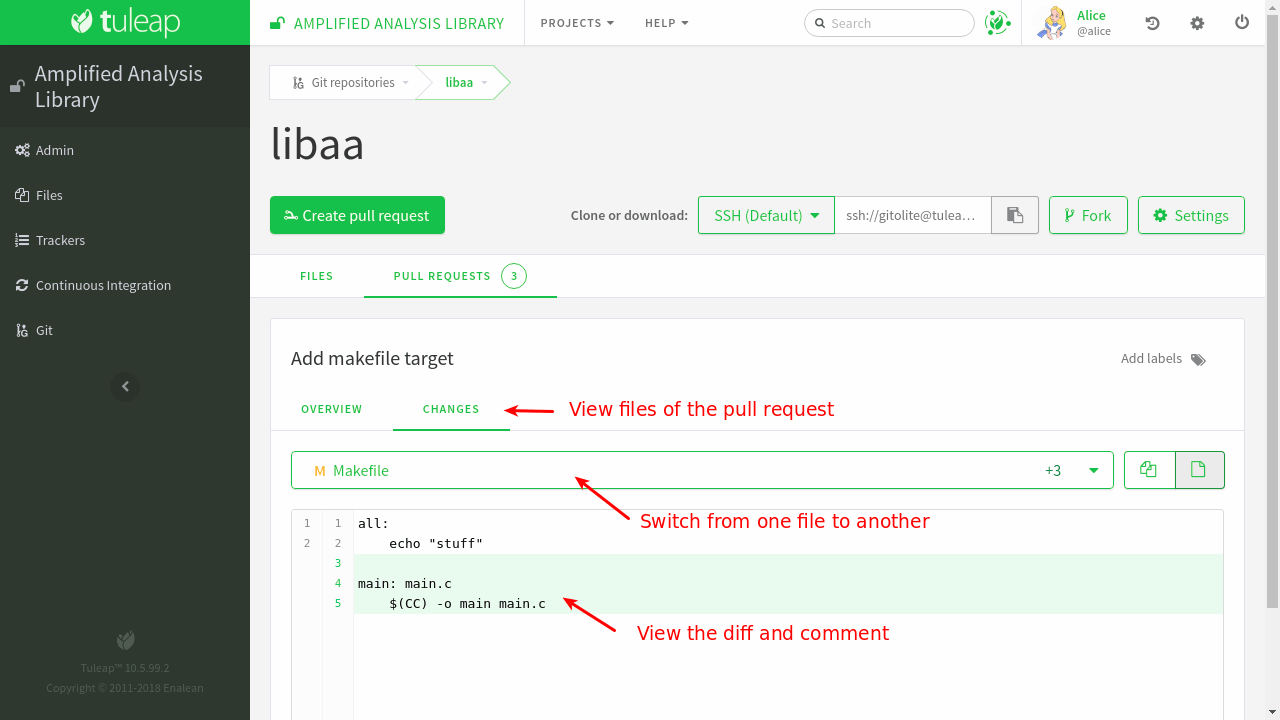 The diff is generated between the latest commit and the base of the branch (common ancestor).

If master evolved in the mean time, you won’t see those changes (and potential conflicts) in this view.

To have an accurate review, you should rebase your work locally with the tip of the branch you want to push in before creating the pull request.

Alice can then comment lines of the diff by clicking on the line number.

Bob can see all of Alice’s comments from the discussion view. 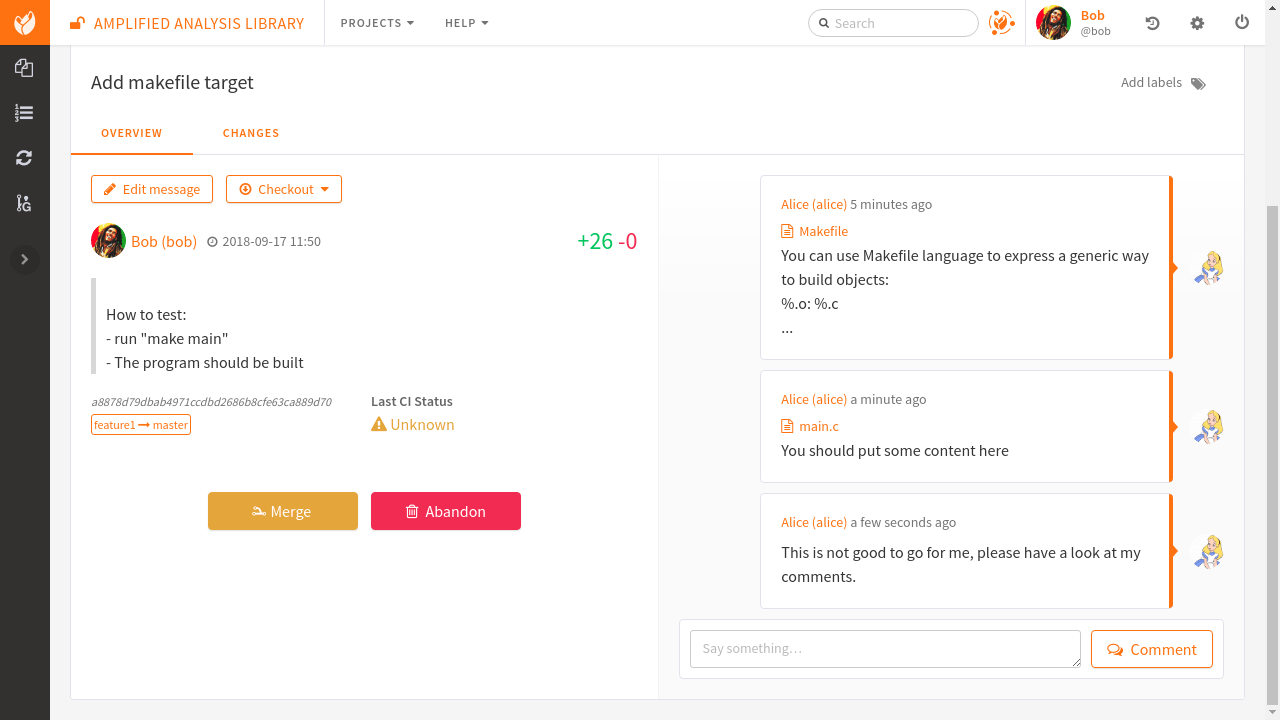 Then he should go back to work and update the branch. When he pushes his work again, the pull request will be automatically updated. 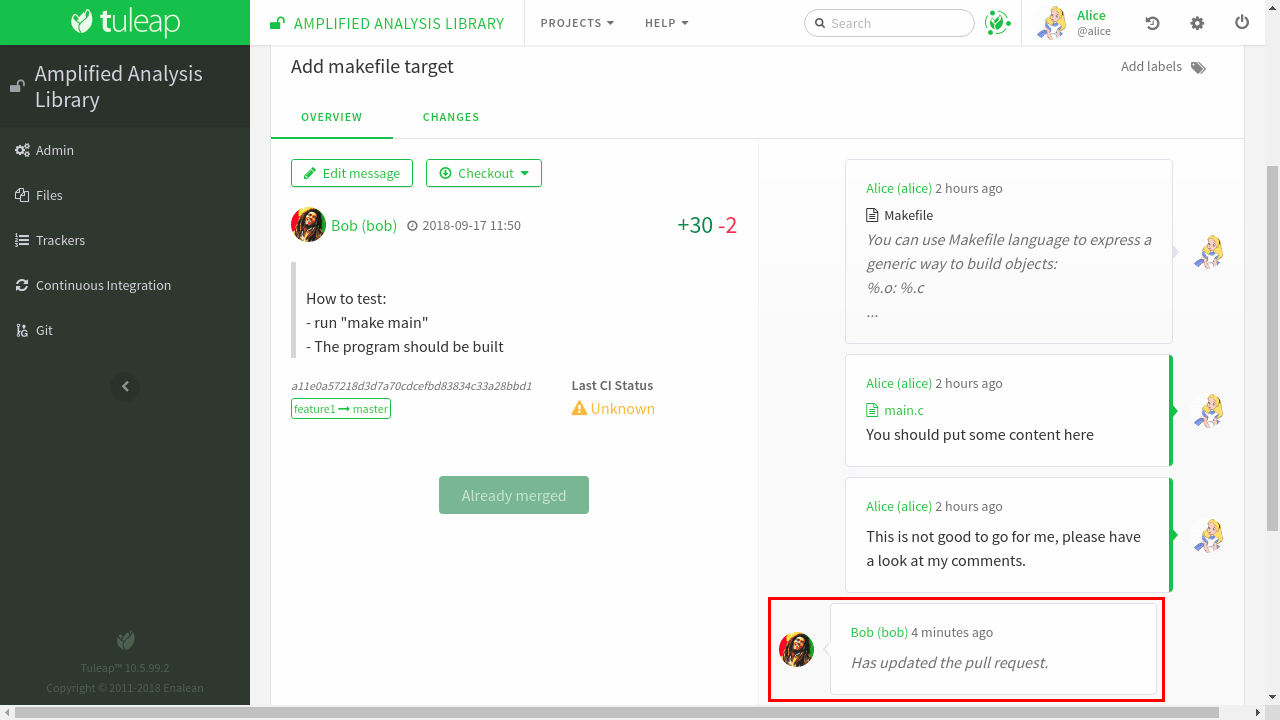 You can notice that Alice’s comments are greyed out. We can see that she placed a comment but we can no longer see it in the diff nor can we access the line from the comment.

This is a known limitation when lines change from one diff to another. The comment was placed on Makefile L4 at the first review but in the second review L4 was changed (the first 2 lines of the Makefile were removed). 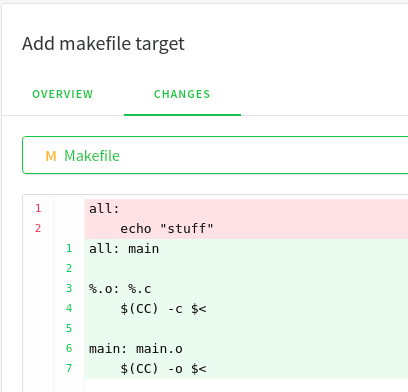 The work is now done, Alice can click on the “Merge” button and the code will be integrated inside master.

Alice can also merge “by hand” in her own working copy and then push to the repository, the end result will be the same.

In the previous example, we followed a basic “feature branch” model where only basic git features are involved. It’s the easiest way to start with code reviews because it basically change nothing to developers workflow (they create branches, commit within and when the work is ready, merge in master).

For developers with more git skills there are two popular practices:

Those two practices happen at the end of the review cycle, when the branch is “ready to go”.

As already said, the diff under review in a PR is a difference of the branch itself. It doesn’t reflect the changes that were done on the target branch (typically master).

So when a feature is ready, integrator might ask for a rebase. Developer would then run on its working copy:

For this to work, developer must be granted the “rewind” permission on the given branch.

Be very careful with “rewind” permission. People granted to rewind can completely erase the repository if they want to.

If you want to generalize the rebase pattern we strongly suggest that you either:

As you might expect, rebase and squash is a variation of the previous one. In addition to rebasing your work with the target, squash means that you will rewrite the branch history to only keep what is relevant as history steps.

Most of this history doesn’t really make sense and will polluate master. You can group all those commit into one:

At this step, your favorite text editor will pop-up and present a “menu” of changes:

You can dig into git help rebase menu to understand all the possible commands but if you want to only have one commit that groups the 4 changes, you’ll need to update and save the file like:

After save, the rebase will be applied (you might have to solve some conflicts) and then, if you issue git log again you will see only one commit:

And you can push the result to the branch:

If you are using pull requests in a repository relying on fine grained permissions and the Git plugin based on tuleap-plugin-git you will not have access to the merge and abandon buttons in the web UI. To make it works, you will need to migrate to Gitolite3 (tuleap-plugin-git-gitolite3). You can find more information on how to do that in the administration guide.

One of the key feature of Tuleap is to be able to reference anything from anywhere and having a back reference automatically created on the other end. Pull requests make no exceptions and follow this pattern.

From the PR, either in description, in global comments or directly within the diff you can reference any Tuleap element (artifact, document, file release, …). The example below is a reference to an artifact in PR description: 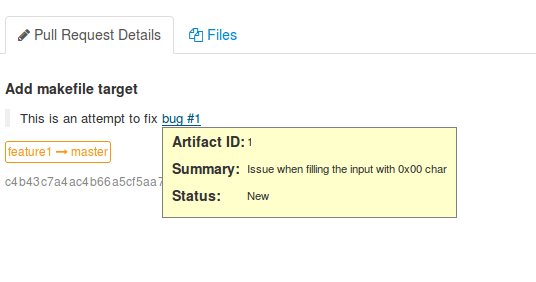 Note: in this example, the bug n°1, automatically got a link back to pull request: 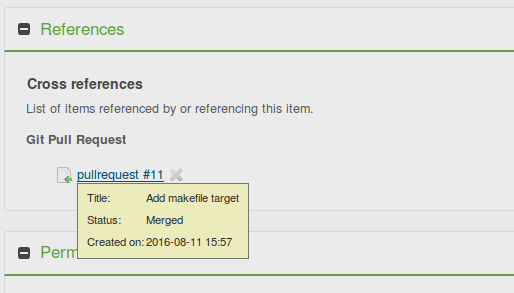 From any element in Tuleap, you can reference the pull request using pr or pullrequest keywords:

User being added to list of reviewers of a pull request also receive a notification.

Notifications are not sent to the user doing the action, i.e. a user will not receive a mail for a comment she has posted.

Hence, before reviewing a PR, the team can ensure that the proposed code has the green light from Jenkins.

The integration is a two step process:

You need to configure Jenkins webhook as described in the git documentation section.

If you are using pullrequests across repositories, you must ensure that the CI job is properly configured to use the target repository.

To trigger a new build each time a pull request is created or updated, set the name to origin, the refspec to +refs/tlpr/*:refs/remotes/origin/pr/* and the branch specifier to **.

There is no Tuleap jenkins plugin yet so you will need to add the quick snippet of shell code at the end of your job to send the status of your build to Tuleap server.

Before deploying the script you will need a special, secret token to ensure that it’s your jenkins job that recorded the build status. To do so, go into repository settings > API token: 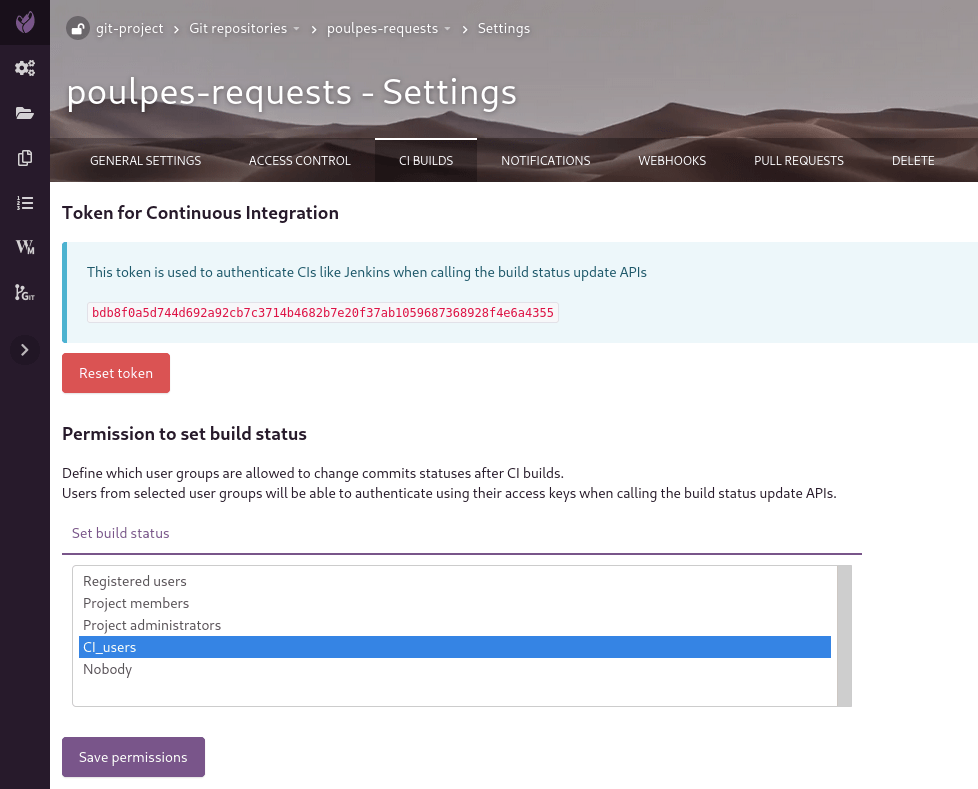 Then deploy the snippet bellow after having tailored the Configure arguments to your context:

You might also to check out the community-maintained CS-SI/tuleap-jenkins-lib library which makes it easier to configure your pipeline. For example, with a declarative pipeline: