This chapter is not a Git Tutorial. It focuses on the integration of Git with Tuleap and how to use it in an optimal way in this context. If you are not familiar with Git we warmly advise you to first read some of the documents listed in the references section (see Git References).

Git support has been designed to support multiple repositories for a given project as well as “Personal repositories” for each developer. This is consistent with the Distributed Version Control System philosophy which allows to delegate project features to be developed in separated repositories.

Two types of repositories are available:

How to use a Git repository:¶

Go to the repository, and under its name, copy the clone url. Now you can paste the url after your git clone command:

Or just add this repository as a remote to an existing local repository:

A reference can be created by project admin from the Git service home page, a reference name can be like reference-project_1.

A reference must be initialized:

If you have an existing repository with branches and tags you want to push, as an alternative you can run:

Personal forks allow to support a fully decentralized development model where “References” are maintained by integrators and represent the official repositories of the project.

In this context, developments should happen in developers repositories (on developer’s computer) and are regularly pushed into a public repositories for sharing with other developers.

If you ever need to group the selected repositories into a common namespace, you can give a specific path the repositories will be created in.

This screen also allows to fork across projects. Given you are administrator of a project with Git service activated, you can choose to create the forks in this project instead of into the personal area of the current project.

In this case, the forked repositories become “References” into the target project.

As a project admin, you are allowed to modify the configuration of any project repositories. This includes:

Project administrators can control permissions details of each repository. By default a repository is readable by all active users of the platform but only project member can modify it. 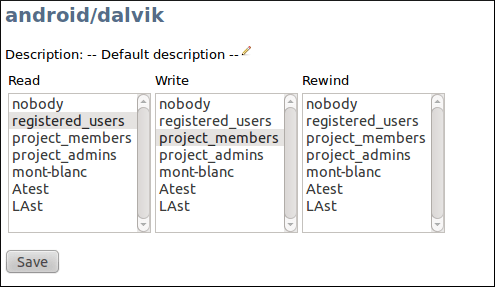 For a better permissions customization, project administrators can manage permissions branch by branch and tag by tag.

To do it, administrators must enabled fine-grained permissions. If the platform allows it, regexp can be used in pattern.

When regex are enabled, they are kept the way administrators wrote them, it might end up in a non working state, invalids regex are ignored without errors. Please see Gitolite regex documentation: https://gitolite.com/gitolite/regex.html 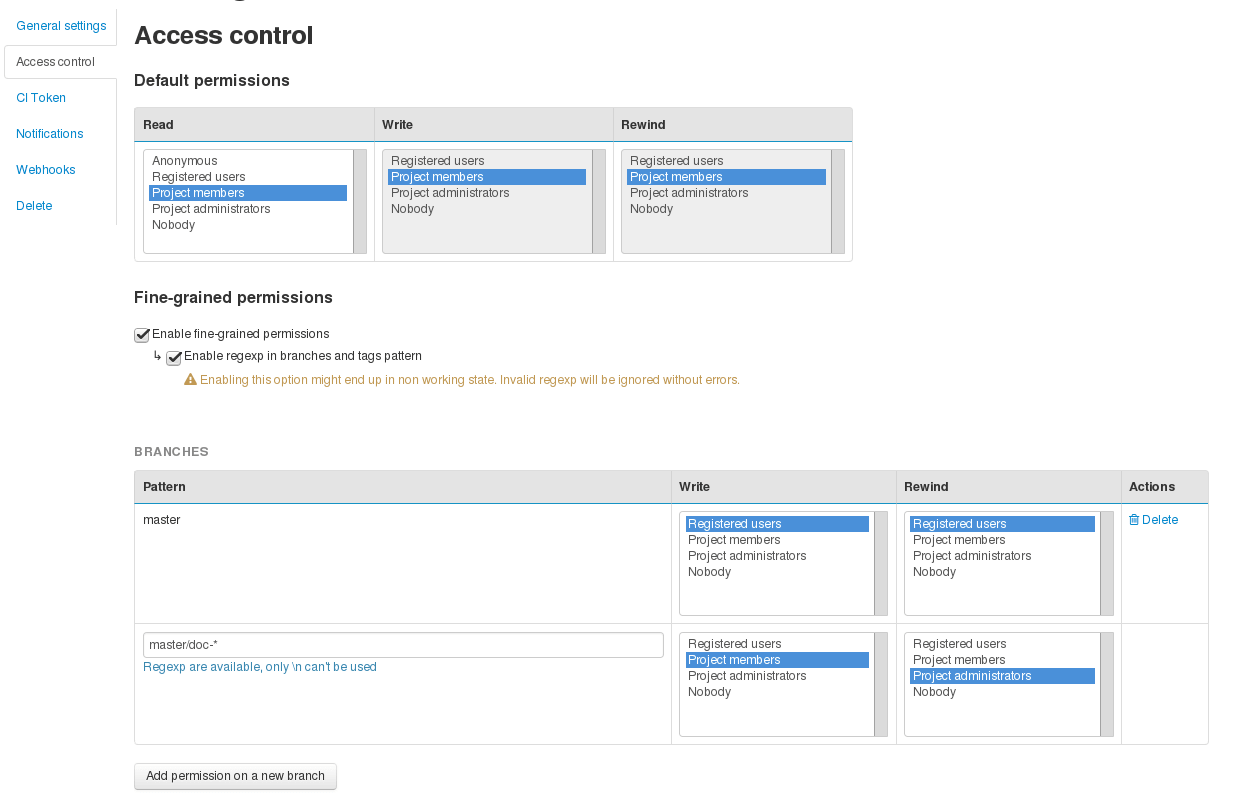 It’s often a good idea to notify the whole team when someone pushes some new content into a repository. You can configure your repository to send an email a list of addresses (or even better a mailing list) upon pushes.

The content of the mail will depend on the push but you can modify:

Once configured, any subsequent push will send an email to the selected addresses. Emails will contain:

Please note that cross-reference extraction will not work if email notification is not configured.

A repository can be deleted, this will create a backup named after {PROJECT_SHORT_NAME}_{REPOSITORY_NAME}_{DEL_TIMESTAMP}.tar.bz2 and move it into Git Plugin backup directory defined in plugin configuration. See import repository section Importing an existing Git Repository for backup reactivation.

There is no automatic procedure to perform repository import. To move one Git repository from one Tuleap project to another, there are two commands to type (after creating the new repository in the destination project):

You can configure you repository so that each time a push is made, a webhook endpoint is called. Two categories of webhooks are available:

Custom webhooks are available for Git. See the Git section in the webhook documentation section.

The best way to integrate a project with Hudson/Jenkins is to configure a Jenkins Webhook. Only one Jenkins Webhook is needed so you cannot create more than one. Please read Push notification from repository from Jenkins documentation for more information.

You can see the list of triggered jobs in the logs section of the Jenkins Webhook.

The feature is documented in Tuleap Git / Jenkins integration section.

Tuleap supports rendering Markdown documents written with the CommonMark syntax directly in the web interface of your Git repository.

It is possible to link to other files in your repo or to images stored in the repository:

Relative links operands ./ and ../ can be used to link to a file relatively to the current file.

Managing large binary files such as video, graphic or audio files is not the strong suit of Git. Large Git repositories will quickly encounter performance issues. To work around that, Git LFS can be used.

The gitlfs plugin needs to be installed and activated in order to be able to use Git LFS.

The basic workflow to get started with Git LFS is:

Existing repositories can be migrated to Git LFS. To rewrite all, e.g., *.mp4 files not present on the remote, for example if you accidentally committed files not yet tracked by Git LFS:

You can also rewrite all, e.g., *.mp4 files on given branches. Note this might require to rewrite the history of the repository and, as such, require Rewind access right. Only do this if you really need it and coordinate with the other contributors of the repository.

After the conversion, push the new repository:

Starting 10.9, new files bigger than 50MB will be rejected automatically by Tuleap. Git doesn’t handle very will large files (esp. binary ones) and those files should really be handled by git lfs (see previous section).

Note: If you were using tuleap before 10.9 and you already had files bigger than 50MB, you will still be able to modify them.